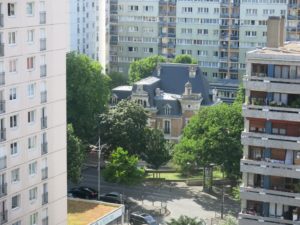 The La Galerie programme reflects the diversity of today’s art in terms of a range of aesthetic and social issues, via the work of emergent or established artists with local, national or international reputations. The programme revolves around two main themes: first of all genius loci, the spirit of place defined by the centre’s distinctive architectural, social and historical associations; and secondly, the word galerie (“gallery”), with its different meanings and implications.

The exhibitions
Gallery: A room or building for the display of works of art

For its four annual exhibitions, the programme systematically starts out from specific ideas or pretexts, either literary, architectural or musical. The avenues explored by these solo and collective exhibitions complement each other, while opening up fresh perspectives and lines of enquiry.

Receptivity and commitment to the local
Gallery: A long room or passage, partly open at the side; a balcony providing space for an audience

Ongoing work on the Grand Paris project is bringing radical change to Noisy-le-Sec and the intermunicipal Est Ensemble locality. La Galerie is participating by going out to make contact with potential visitors and engage in collaborative ventures with publics otherwise lacking  the chance to develop a taste for today’s visual arts. The art centre functions as an incubator for ideas, an agora where knowledge can be shared in close connection with the region’s new visual arts organisations, notably Micro-Folie Noisy-le-Sec and Komunuma in nearby Romainville.

The cultural programme
Gallery: A group of spectators

The fundamental principles of an art centre: to guide and assist the emergence of challenging projects and their production and dissemination, while constantly mindful of the need for accessibility for the public at large. In line with these requirements, La Galerie’s cultural programme is aimed at establishing a dynamic of “social involvement”, of interplay with Noisy-le-Sec residents that will let them “blow the spectators away”. This project stresses a day-to-day forging of links between the aesthetic and the social spheres, between an exacting creativity receptive to the world and its challenges, and a cultural transmission adapted to each individual. With respect to contemporary art – and especially its artists – modes of seeing, encountering and living together are imaginable, which it seems important to make the most of. The urban and social context offered by La Galerie is an ideal tool for contributing to dialogue between artists, local stakeholders and the various publics.

Noisy-le-Sec is a municipality of some 40,000 people in the Seine-Saint-Denis département, 9.5 kilometres from Paris.

During the Second World War Noisy-le-Sec, and especially its railway yards, suffered massive Allied bombing aimed at undermining Germany’s logistics. Damage to property was enormous and the La Galerie building was one of the few to survive unscathed. Noisy-le-Sec was officially declared a disaster area on 5 August 1944.

Its reconstruction made it a Ministry of Town Planning testing ground and it was the site of the Cité Expérimentale de Merlan competition in 1946: seven countries – France, the United States, Canada, Great Britain, Finland, Sweden and Switzerland – took part in the project, which called for mass-production building procedures for housing that would be sound, comfortable, large-scale and cheap. The aim at this period was to build very fast, which meant rationalising and standardising architectural procedures; these years also saw the first “slab blocks”, which brought radical change to the landscape of the Paris outskirts. In Noisy-le-Sec the Cité des Aviateurs housing estate was built between 1955 and 1960; combining rapidity and economy, this social housing block served as the prototype for most of the suburban housing estates of the time.

According to a 2005 survey, the municipality comprises almost 41% social housing. 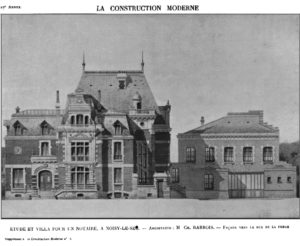 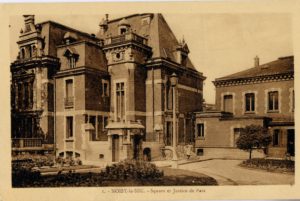 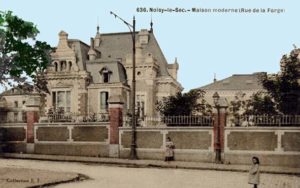 Built in 1880 by architect Charles Barrois, the building began life as the home of Noisy-le-Sec’s notary public.

In 1913 it was acquired by the municipality for various state services: the taxation office, apprenticeship classes, a justice of the peace, and the issuing of tax stamps and permits. During the First World War it was requisitioned as a local military hospital before becoming an official evacuation hospital. After the First World War the building was home to the public library and the local prehistory museum. Spared by Second World War bombing, it housed certain municipal departments; in 1945 the library moved back in and remained until the opening of the Roger Gouhier media library in 1998. It was then refurbished as a centre for contemporary art.

Since January 2005, La Galerie has been directly managed by the City of Noisy-le-Sec Cultural Affairs Department.